Limited, portable, divisible, durable, and acceptable. These are some of the key properties that we have culturally agreed upon for the imaginary construct of money. We say imaginary, but we could say fiat or government mandated. In the end, the reason why money is valuable is because we have explicitly and implicitly agreed that it is. Over the years, we’ve used many things as money. Gold often comes to mind, but there were plenty of other mediums of exchange that took us off the barter system: sea salt, cattle, seeds, giant stones (even if submerged in water), and cigarettes in prison. All of these are no longer commonly used, except for cigarettes. Thus, we ask the question: Are traditional government sponsored fiat currencies going to follow the same path as these other mediums and become just another point in the continuing evolution of money?

We’d like for you to consider a thought experiment by pondering two opposing statements. Imagine that it is 2040.

Consider this statement: “Isn’t it crazy that there was a time when we trusted the government with our money, that was obviously a pretty bad idea,”

Or perhaps this statement, “Isn’t it crazy that back in the 2020’s we thought these 1’s and 0’s of cryptocurrency could substitute for real money… that obviously was a pretty bad idea.”

One thing we have learned is that hindsight does have a way of giving the appearance of things being “totally obvious”. But as we all know, trying to predict what the future world looks like is difficult, and cryptocurrency predictions make stock market predictions look easy.

In this piece, we will not try to educate you on the technical details of crypto, but if curious about that, we would suggest getting familiar with the following terms:

Related to the list above, here some resources that we believe are reasonable should you want to learn more:

As you proceed down the list, these will get progressively more technical. The first four are very digestible for the common investor. The CFA Institute brief on Crypto is more technical but still accessible with good investment knowledge, however the original publishing by Satoshi Nakamoto is a highly technical paper requiring a deep understanding of cryptography, computer science, and economics.

Should We Invest in Bitcoin

We originally ran across Bitcoin in a 2014 NPR article. Back then we experimented with Bitcoin 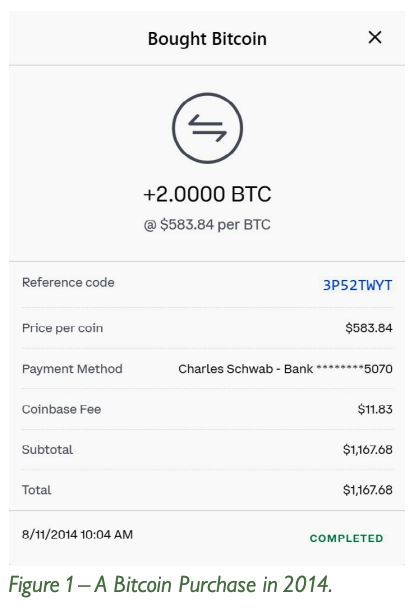 simply as “play money” not taking it seriously. This seemed like nothing more than a novelty. However, as the infamous Silk Road website was finally seized by the FBI, Bitcoin got more publicity as it became apparent that the bad guys had found a specific use case, the technology was technically brilliant and solved their payment problem. As for Bitcoin, like the US $100 bill, both are agnostic to its use case. Wall Street and technologists were slowly realizing that the properties of blockchain and Bitcoin had legitimate merit. However, following Silk Road’s demise, Bitcoin experienced its first crypto winter, even as the technology and awareness continued to disseminate.

Between 2015-2017, a handful of prominent investors started to take positions. People like Peter Theil, Chamath Palihapitiya, Tim Draper, Michael Novogratz, Bill Miller, and other respectable investors were making headlines with their endorsement and “buy in” of Bitcoin and other crypto tokens.  Interestingly, many other prominent investors and businesspeople like Warren Buffet and Jamie Dimon took the other side of the stage calling it a Ponzi scheme, close to a scam, a tulip bubble, and a few other pejoratives. Thus, we were seeing legitimate investors on both sides making compelling arguments for the investment case or lack thereof.

If investors are looking for substantial returns, they must invest in things most other investors see very little value in. Then over time this opinion needs to change and value can be recognized. This counter-intuitive idea makes the early investor look almost comical in their view of the world at the onset. But over time, if the crazy idea does come to fruition, that iconoclast now starts to look prescient in their foresight. Once the rest of the world is on board, the money has already been made. The reverse of this is that it is psychologically easy to invest in what the world views as mainstream. Mainstream ideas usually get overfunded and leave less profits to be had. In the iconoclast strategy, it may turn out to be a bad idea for good reason, yet in the mainstream approach you’re investing with the herd and unlikely to have exceptional returns over and above the market as a whole.

Where does crypto stand on this spectrum? Is it mainstream or radical? 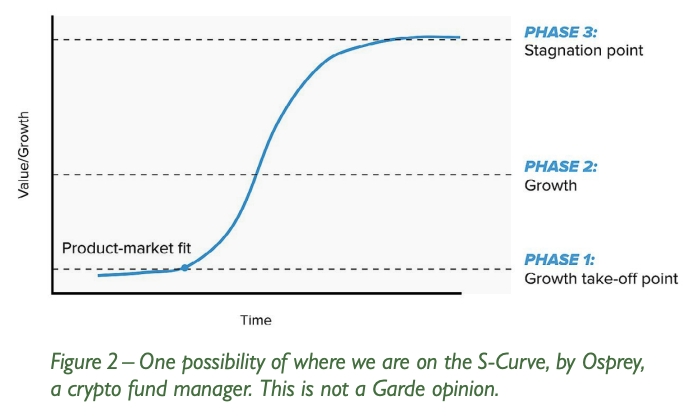 Here we are reminded of the traditional S curve, our best guess is that we are probably beyond the infancy stage and somewhere in the expansion phase. We would doubt that we are at the maturity stage, but being such an unusual asset, it is possible that the traditional S curve misrepresents how things might develop. Thus, if we are anywhere in the middle of the curve, it’s probably reasonable that there is some money to still be made.

As financial analysts, we learn to look at investments as discounted cash flows and a potential terminal value to create a present value that informs our investment opportunity. The problem with cryptocurrencies is that there are no cash flows, and trying to determine a terminal value is next to impossible.

An alternative way to look at the problem is to use a utility model. This means trying to determine the total utility to society and implying that there may be some premium or discount to that utility. In general, if we can figure out the overall value to society, and maybe that can give us an idea of what it might be worth.

Investors hear a lot about fintech and disruptive technologies in payment systems. One reason for this is that the current system, roughly structured as the Bank of International Settlements (BIS), their 62 central bank members, the money center banks, the fractional banking system, and the Visa/Mastercard/Amex and ACH systems, is generally using technology that is many decades old and would never be replicated today given where we are technologically.  However, due to their embedded interests, the incumbents are extremely reluctant to endorse change that doesn’t keep them in control of their ability to continue to monetize the system.

We saw an example of bad technology recently at Garde Capital. We were trying to get a wire in British Pounds to remain in British Pounds and be held in a US domiciled account. Theoretically this is not very complicated, but between HSBC London and Fidelity USA, we learned that it would take a week or two to move through the Bank of England, BIS, US Federal Reserve, and into Fidelity, requiring more than a few phone calls and confirmations and a lot of frustration on the part of the client.

Now let’s contrast this with the idea of being able to move the equivalent of $100 from Seattle to Doctors Without Borders for their Lake Chad crisis. With a simple public address, which looks like “175zv29WWDeRELuKeSxTGm2SGAd2m9Xr5Y”, they can receive the money in a matter of seconds, have it confirmed in less than ten minutes, and be able to move forward with financial support they may desperately need. 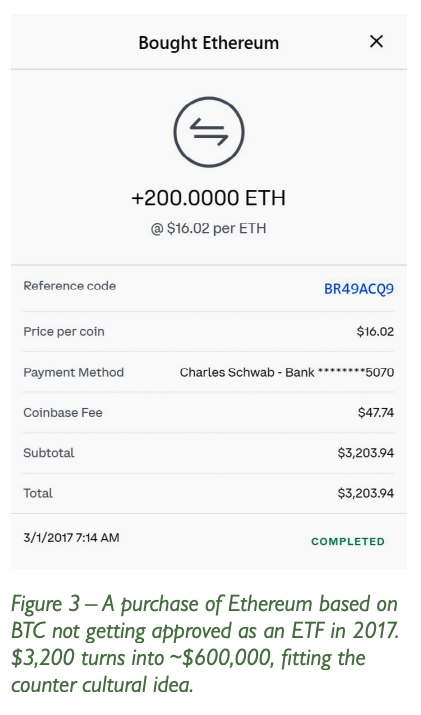 However, it gets better. Now we can start programming scenarios that determine how money gets moved, eliminate the traditional payment system, decentralize all of it into a trustless network, and eliminate discriminatory issues for people to engage in the global monetary system. What might the value of this be? We think there are two possible answers. One has to do with the idea of what is needed to facilitate global commerce, and the other is related to the value of replacing the traditional financial system. In both cases we might see values in the tens of trillions of US equivalent dollars.

Although this is an interesting thought experiment so far, we know that the embedded infrastructure will not roll over easily. Governments are likely to stick with what is safe for them. Just because something is first in a new technology, doesn’t mean that it will be the winner. It was great when Yahoo! overtook the yellow pages, but it was even better when Google disrupted Yahoo!.

Keep in mind as well that we’re discussing Bitcoin here, but important programable blockchains like Ethereum may have even more long-term value in creating immutable ledgers for many uses outside of monetary functions.

So far, we’ve looked at the investment issue through the eyes of disruption and new technologies. However, there is another way to determine the reasonableness of our investment, the Market Model.

To distill this idea into its essential parts, the Market Model basically says that if we buy all investable assets at proportions relative to the overall market, that will give us the most efficient portfolio (defined as the best risk-adjusted portfolio) at any point in time based on the aggregate of investor expectations. Currently the aggregate value of all cryptocurrencies is ~$2.05 trillion. The total world stock market value of all companies is about $93 trillion. Therefore, investors have determined that the equilibrium based on all investors’ decisions, is a portfolio of about 2% cryptocurrencies and 98% global stocks. If we don’t have this balance, we are running a less than efficient portfolio from a risk/return perspective. Implicitly, if we have no crypto investments in our portfolio, we are saying that the market’s $2 trillion valuation is far too high, and if we have 10% of our portfolio in crypto, we are saying that the market is undervaluing this asset, and we believe it is actually worth much more. Thus, it is worth saying again, a roughly 2% position would represent a neutral position in crypto.

Because of the unusual nature of this investment, it is very difficult to say that someone should or should not invest in crypto, but here are few things to consider. If you invest in crypto and it is going to bother you to lose money, do not invest in Bitcoin or any other crypto. If you were a pure Vulcan, in the mold of Mr. Spock of Star Trek fame, you might rationalize investing at the market weighting. In true Vulcan style, you would not be emotionally challenged whatsoever if things went wrong. On the other hand, if the fear of missing out or the joy of being “in the game” adds additional value to your overall lifestyle outside of financial motives, maybe a small position is worthwhile.

While we can never be sure what the future holds, there is one thing we know with confidence… in the year 2032 or 2042, it is likely that many will look back and say, “That was totally obvious!”