With the Federal Reserve continuing to buy $120 billion of bonds per month, and the US Treasury continuing to run substantial de!cits to stimulate the economy, we are now seeing what we believe to be the most signi!cant in”ation concerns in some time. And, as we recover from COVID and see the new economic landscape emerge, we think it’s clear that things will never be the same.

This article is speci!c to in”ation but will dovetail on several issues including how consumers and businesses interact with the price of goods and services, and how we apply substitutes and technological advancement; these e#ects are all inter-related. How they relate to your investments is the primary point in question.

The general rise in price levels over time is simply the definition of inflation. However, the way consumers and business perceive this change in overall price level is critical to how it persists. It can either be a one-time rise in the price of something or a permanent cycle of continuously rising prices.

Currently, investment markets are struggling to understand the balance between these two ideas. If we are at the front end of persistent inflation, well, markets will have a much harder time with that than simply a one-time bump in the price of some things.

How In!ation Affects the Price of Investment Assets

To understand how in!ation e”ects investment assets, we think it is reasonable to look at this in two parts: the discount rate that is applied to future cash !ows, and what happens to the cash !ows themselves.

This is the easier part of the puzzle with the idea being that if we have an annual cash flow in perpetuity, say from an apartment building, a bond coupon, or a stock dividend, then by applying a higher discount rate (also known as a risk premium) we have a lower current value. The risk premium is set as a rate of interest and the riskiness of the assets is part of that discount rate. The other parts of the discount rate are the available interest rates on competing investments (like treasury bonds) and the rate of inflation. Thus, if inflation increases, then the overall discount rate, all things equal, would increase too. Let us illustrate:

However, the story is not over because the asset’s cash flows will change depending on the asset’s unique circumstance.

How Does Inflation Affect the Cash Flows?

Let us look at a model to help us better understand. For this model, we need to look at how in!ation impacts each part of the balance sheet and pro”t/loss statement. To do that, we apply the e#ect to assets, liabilities, income, and expenses. When we look at all these together, and run the business or asset through in!ation, we can think about happens overall when they’re combined. 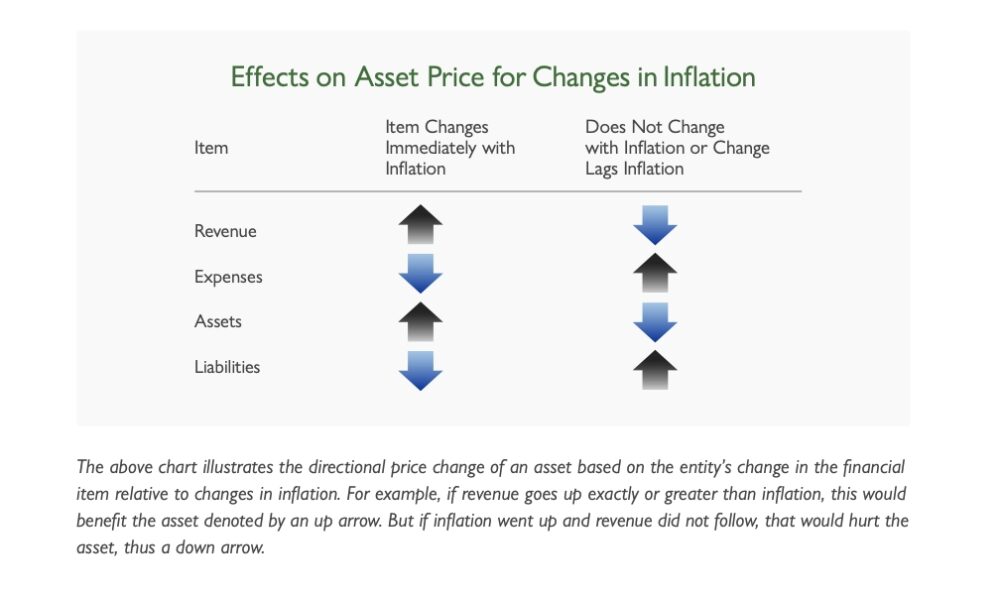 An investor needs to model out the impact of each item, the degree of impact, and aggregate them to determine how inflation might affect the price of a given asset. By the way, when a higher-than-expected inflation indicator is announced, you can see the effect immediately by what happens to the market prices of publicly traded assets like stocks and bonds; most asset prices are hurt overall in the short run, but some of them are helped.

One big difference in how the markets react to inflation is the idea of whether inflation is transitory or permanent. Transitory simply means it is a onetime change that will not persist; and while transitory inflation will have an impact, it is the permanent inflation scenario that’s the difficult one

The story of permanent inflation goes like this: if there is a lot of extra money circulating in the economy (excessive government spending and easy monetary policy), then there is lots of ability to purchase (demand) and possibly not enough goods and services (supply). This results in price increases throughout 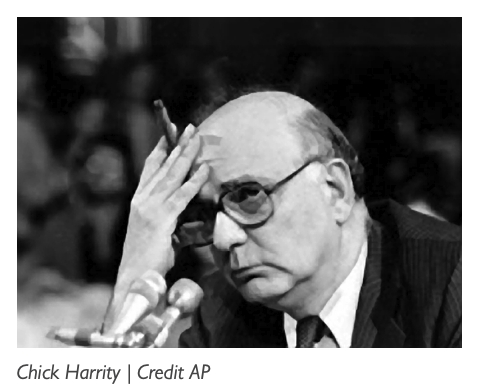 the economy. Often the supply of goods and services can increase to reduce the mismatch, but if it cannot increase fast enough we may have just gone from transitory to persistent inflation. This can start a cycle where the producer of a good or service says “hey, my costs just went up, I’m going to increase price.” Next, the person or entity buying the product says “wow, the price of milk just doubled, I need to ask for a raise.” The producer then again gives employees the raise and the cost of producing the milk goes up further. The buyer again sees prices going up and asks for another raise. Once this happens through several cycles the mindset within the economy is that prices are going up, this is going to continue, so I better keep asking for more. Now we’re on a perpetual inflation machine that we can’t get off of unless someone, usually the Federal Reserve, restricts the money supply, killing inflation, but inducing an economic recession at the same time. Paul Volcker was the posterchild in the 1980s for this, and investors still reflect on the painful experience of what happened.

Despite smoking cigars during Federal Reserve testimony, Paul Volcker lived to be 92 and is considered an exceptional Federal Reserve Chairman, even though he was unpopular at the time when he needed to break inflation.

Permanent inflation is considered very problematic and can have devastating effects on the economy as well as a substantial redistribution of wealth within society, especially between investors that owe things and investors that own things.

A reasonable story about transitory inflation is that of used cars in April of 2021. That month the price of used cars rose by 10%, the most ever for a single month. Why did it happen? Remember, overall inflation is the sum of all price changes in proportion to how much they’re used in the economy added all together. Cars are something expensive so their price changes are a decent part of overall inflation.

Background: One of the biggest suppliers of used cars are rental car companies. In most cases they have attractive terms for buying cars from manufacturers. They own cars for an average of 13 months, and then they go to the used car market. In March, April, and May of 2020 during the height of the pandemic lock-downs, these rental car companies stopped buying new cars. Hertz even filed for bankruptcy, thus not many cars were bought by rental car companies.

As we now see the economy opening back up, many people have left urban centers for more remote living locations. Combine this with the fact that many people are now reticent to take public transportation because of Covid fears, thus a spike in demand for used cars. At the same time supply is limited because the rental companies don’t have the cars they’re usually selling. Suddenly we end up with a 10% increase in the price of used cars for the month of April.

However, will this last? It is unlikely that once the initial surge of used car purchases gets behind us, that prices continue to increase. New cars are also a great substitute for used cars, so that creates a cap on what is likely paid for used cars. As the factories that were shut down last spring are now open and rental car companies replenish inventories, this creates a lagged e!ect on the used car supply. Therefore, in the case of the used car phenomena, is this a onetime issue (transitory), or a permanent increase of 10% a month in perpetuity? Our money is on the “rst. By the way, in the supply of cars, we have a chip shortage also leading to slowdowns in production of new vehicles, thus a second order e!ect that the substitutes for used cars may be less attractive.

Now to get an idea of whether the current inflation is permanent or transitory, we have to get a feel for the degree by which inflation and the money supply is changing the attitudes of consumers. We also need to study the degree by which these special cases, like the used car phenomena, will dissipate and get us back to an average rate of inflation of around 2%.

Another big issue with inflation in the economy is that in general, when prices are unpredictable, it just creates more friction in the economy. This friction is caused by the uncertainty of what the future price for things will be, making planning harder, and also shows up in the risk premiums because things are now riskier. An example of this is airline budgeting and future airfare prices, oil is a big component of airline costs, and if you don’t know what’s happening to the future of oil prices, it creates challenges in where to price airfares and a potential mismatch between revenue and expenses.

Hopefully, we have communicated these inflation concepts in such a way that you might be able to build a mental model of how inflation affects investments. As far as actions an investor can take, good diversification is the best place to start. Own assets that are going to be benefited by inflation, as well as those that might not. Over time, all things generally inflate, but it is usually early in the transition to higher inflation where investors can be most hurt.

Examples of things that typically do well in an in!ationary environment are gold, Treasury In!ationProtected bonds, companies that can quickly increase prices and not have other e”ects, owing money, and even Bitcoin can be argued to have some in!ationary bene”ts.

Things that do not do well with increases in inflation include long term bonds, being a lender (the opposite of owing money), and companies that have long term contracts on pricing that don’t inflation adjust. You may have noticed in your portfolio that we had a significant change to our fixed income holdings about 3 months ago, moving out of regular Treasury bonds and into inflation-protected bonds for all the reasons mentioned above. So far, this trade has worked out well. Lastly, nobody has a crystal ball on the

degree by which in!ation may or may not work itself into the economy, but we wanted to share some ideas and opinions because informed investors are con”dent investors. We believe understanding and being appropriately con”dent in your portfolio are two factors that contribute to long-term investing success. As always, we are more than happy to discuss this in more detail at your convenience.

A Strange Moment for the U.S. Economy – New York Times

Exchanges at Goldman Sachs – What’s Ahead for Inflation

Jeff is the Chief Investment Officer of Garde Capital and a Co-Founder. Jeff has an MBA from Columbia University and the University California at Berkeley, and a Bachelor of Arts degree from the University of Washington. Jeff has been an adjunct instructor for the Masters of Science in Financial Engineering program at Seattle University and instructing for the CFA Program in Derivatives, Alternative Investments, and Portfolio Theory, and is a CFA Charterholder.