The End of the “Everything Bubble”?

Economic Growth, Inflation, and the Fed

With the S&P 500 Index nearly in bear market territory (down 19% at the time of this writing), there is increased buzz in the media regarding the risk of economic recession. If not recession, then perhaps stagflation, which is a prolonged period of slow economic growth and high inflation. In this research note we will examine current economic conditions, inflation, monetary policy, the financial markets, and attempt to put the current market volatility into context.

The media is awash in attention-grabbing headlines containing the word “recession.” A brief Google search will return a profusion of articles: “Most CEOs are Bracing for a Recession” – CNN, “Recession Trade is on as Market Pain Spreads Beyond Tech” -Wall Street Journal, “U.S. may be barreling toward recession in next year, more experts say” – Washington Post; the list goes on. Generally, a recession is defined as two consecutive quarters of negative real GDP growth, but the National Bureau of Economic Research (NBER) is the official authority that defines the starting and ending dates of U.S. recessions.

Recessions can have a variety of causes, but they all fit into one of two categories: a decline in aggregate demand, or a decline in aggregate supply (often from an exogenous shock, like a pandemic), or some combination of both demand and supply. During 2020 we experienced a massive decline in aggregate supply as worldwide pandemic lockdowns stopped a significant portion of economic production. Aggregate demand also declined briefly as employees were laid off, but then surged as government stimulus checks flowed to taxpayers and the Federal Reserve poured liquidity into the financial system. The 2020 recession was the deepest since the Great Depression, but also one of the shortest. As the economy reopened post-pandemic, U.S. economic growth exploded, and unemployment quickly declined to pre-pandemic levels. 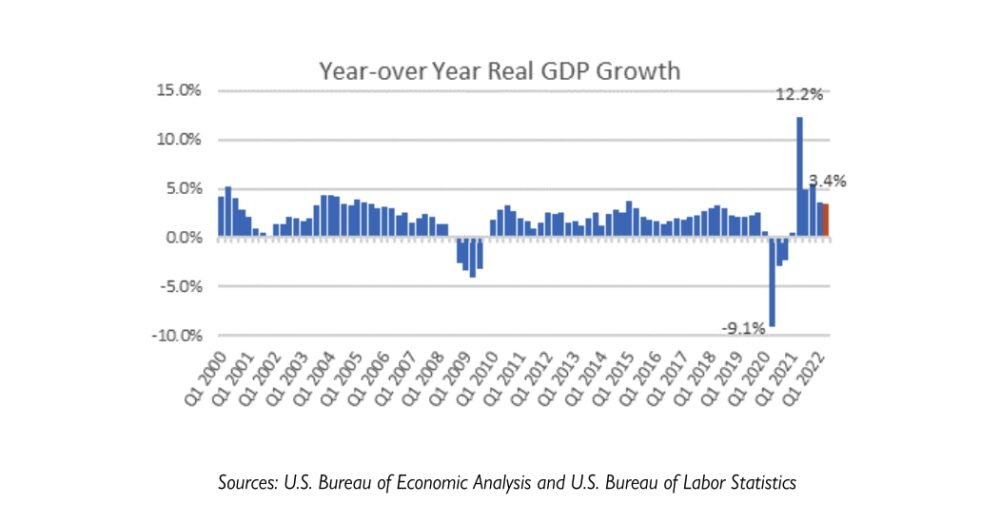 So, what might cause a recession in the coming months or quarters? On the aggregate demand side, the Federal Reserve has begun tightening monetary policy to combat the fastest inflation in 40 years. By raising the Federal Funds rate and reducing the holdings of bonds on its balance sheet, the Fed’s goal is to reduce aggregate demand enough to slow inflation without bringing about a recession. Higher interest rates filter through the economy by increasing borrowing costs for consumers and investment costs for businesses. Reducing the size of the Federal Reserve’s balance sheet will reduce bank reserves (thereby reducing the supply of loanable funds), which should slow the growth in the money supply and eventually reduce the rate of inflation. As seen in the chart below, the growth in M2 money supply has already come back down from the pandemic highs, but monetary policy often has a lag of 12-18 months. There is likely still some inflation in the pipeline as a result of the money explosion we saw during 2020, but we will hopefully hit peak inflation sometime in the next few months, if we have not already. 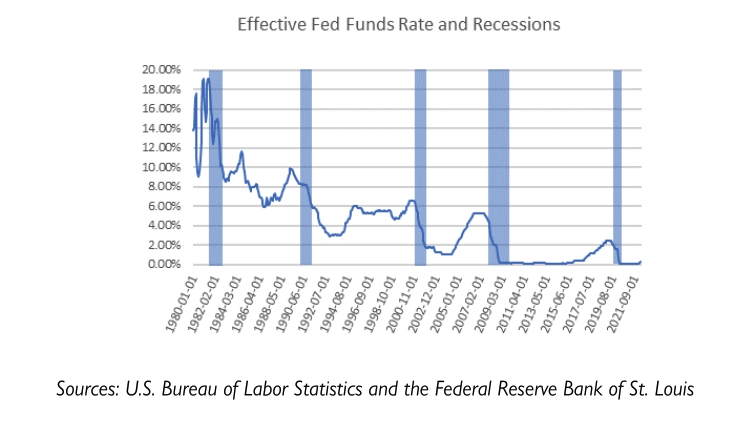 On the aggregate supply side, we are unfortunately seeing new supply shocks. The Russian invasion of Ukraine and the subsequent economic sanctions on Russia have sent energy prices soaring. The EU is implementing a ban on Russian oil and is hoping to eliminate Russian gas imports by 2030. The global supply of wheat has been another war casualty. Over 25% of global wheat exports come from Russia and Ukraine, and shipments have plummeted during the conflict. Meanwhile, China has doggedly stuck to its “zero Covid” policy, which includes severe lockdowns in cities of millions of people. This stubborn policy is contributing to the ongoing shortage of key parts and materials for many global manufacturers. Unfortunately, these supply problems are unlikely to abate anytime soon, so companies must adjust to these new economic realities by rejiggering supply chains which increases costs borne by the end consumer.

While there are clearly headwinds for the U.S. economy, a tightening Federal Reserve is not always a precursor to a recession. According to a recent research piece from Goldman Sachs, 40% of post-WWII Fed tightening cycles did not lead to recession. Another piece of data in the positive column is the relatively light debt load of consumers. The current household debt service ratio is near its lowest ever going back to 1980. This means that even though interest rates are rising, households still have capacity to borrow and spend in the coming years, which bodes well for consumer spending and economic growth.

As the bond market comes to grips with high inflation and the Federal Reserve’s commitment to subdue it, interest rates have risen sharply. The 2-year Treasury yield, which began the year at 0.73%, is now up to 2.60%.  The 10-year U.S. Treasury yield hit 3.13% on May 6, although it has recently backed off to the 2.85% level. While still low by historical standards, it is up over 5X from its pandemic low of 0.51%. To illustrate what this move in rates implies when starting from such a low yield level: if you had purchased a 10-year Treasury note in August 2020, you would be down a whopping 15%! On the positive side, your bond which once yielded 0.51% will now return 2.8% (if held to maturity from here).

Not only is the Fed raising the Fed Funds rate, but it will begin reducing the size of its balance sheet by letting bonds run off (mature) beginning in June at a pace of $30 billion per month for Treasuries and $17.5 billion per month for mortgage-backed securities. It is no wonder Treasury yields have been rising, given the exit of such an enormous buyer from the market. According to a recent piece in the Wall Street Journal, this is the worst period for bond returns since 1842. But since we don’t have easy access to data from that far back, let us look at the current decline in the bond market relative to declines over the past 80 or so years, for which we do have reliable data. 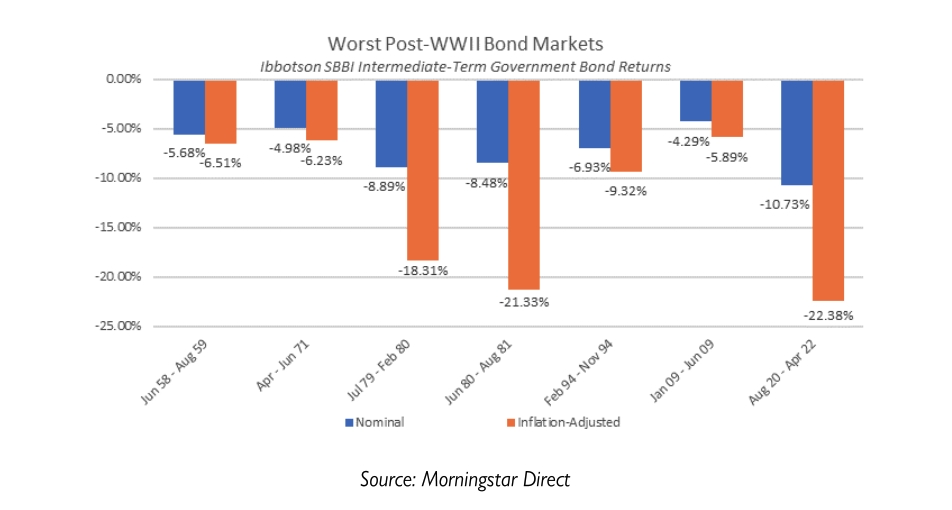 You can see from the chart above that we are currently in the midst of the worst bond market in the post-war era, both on a nominal and an inflation-adjusted basis. The inflation-adjusted returns in this chart were computed as the total cumulative nominal drawdown of the Treasury index, less the cumulative CPI inflation over the same period.

Traditionally, bonds have suited the role of being a diversifier and a risk-reducing asset when included in a stock portfolio due to their low correlation to stocks and their low volatility. An unusual feature of the current market volatility is the increased correlation between stocks and bonds. For most of the last decade correlations between stock and bonds have been decidedly negative, which has worked well for balanced portfolios, but in 2021 stock and bond returns began to move in the same direction. See the chart below. 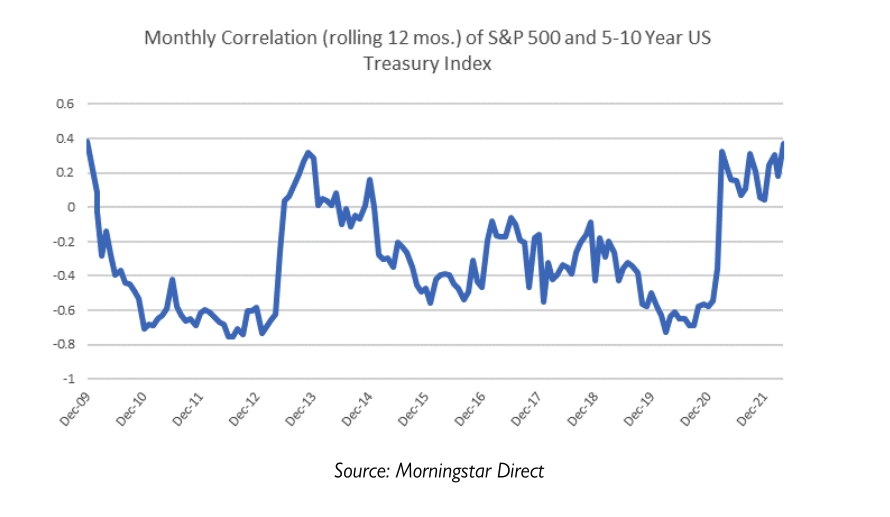 While there have been other periods of positive stock and bond correlations, they typically don’t last very long.  As Fed policy begins to take hold and inflation abates, we expect the correlation to eventually decline back into negative territory.

The silver lining of the enormous sell-off in bonds is that the bond market is set up for better returns over the next few years now that yields have risen significantly, although they could rise further. Factors such as persistent inflation, the absence of Fed purchases, and continuing high federal deficits will exert upward pressure on yields. At the same time fears of slowing economic growth, in combination with foreign buyers searching for higher yields in the U.S. versus their home currencies, will exert downward pressure. Our suspicion is that as the Federal Reserve continues to raise short-term rates, longer-term Treasury yields may eventually decline as inflation is brought back under control, helped by the easing of supply chain congestion.

The risk-off trade that began in January has gained steam the past few weeks. Stocks, real estate, crypto, virtually all risk assets are down, with the lone exceptions being commodities and energy. The sell-off in technology and growth names has been especially acute, with the Russell 1000 Growth Index down -26.59%. Value stocks have held up better, down only -9.37%. If one hearkens back to the stodgy old finance principle known as the present value of cash flows, it is easier to understand the broad market sell-off and the steeper decline in growth stocks. As interest rates rise, so too does the discount rate on future earnings, thereby reducing the price of a stock. This idea is easy to forget when the stock market is going up by 15-20% a year and growth stocks are going up by twice that. For mature, dividend-paying value stocks, the cash flows are front-loaded for investors. In bond parlance one might call value stocks “low duration” stocks. They should be less interest rate sensitive than growth stocks whose true earnings potential is more nebulous. Growth stocks may be growing revenues quickly, but the probability distribution of future returns is wide and the cash flows to investors are often further in the future (or perhaps never in the future, in the case of crypto and NFTs). One might think of growth stocks as “long duration” and subject to steeper price declines as a result of a higher discount rate on earnings. 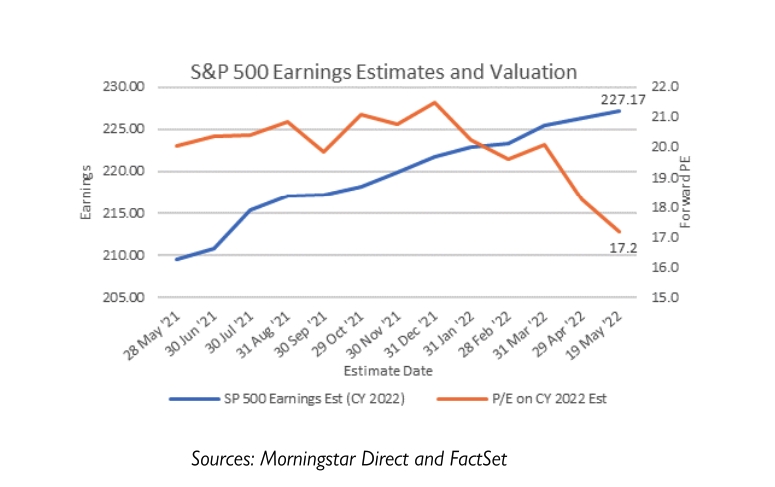 Again, the silver lining for stock investors that suffered through the recent decline is that future stock returns have increased as a result. Investors who are investing new cash or rebalancing their portfolios can now buy stocks at a 20% discount versus the price at the start of the year. And they are getting an earnings stream that, if earnings estimates are to be believed, is expected to grow at 10%+ for the next two years. While earnings estimates can sometimes be overly optimistic, the forward P/E on the S&P 500 on CY 2022 earnings estimates is a respectable 17.2, not far from the 25-year average of 16.8. One could even argue that this should be considered a more attractive P/E than P/Es of the past because interest rates are much lower today than the 25-year average.

During times of market volatility, it is difficult to avoid the cacophony of doom and gloom emanating from all corners of the media. Recession, war, and further stock declines are the fears du jour in 2022. As investment managers, it is our job to ignore the noise, do our research, and focus on our process and maintaining our disciplined approach. While we do see risks to economic growth over the next few quarters, such as higher interest rates and continued supply constraints, we also see positives in terms of low consumer debt loads, low unemployment, positive earnings growth, and hopefully easing inflation pressures. We know the Federal Reserve has the tools to reduce inflation, but there may still be some inflation in the pipeline since policy effects have a significant lag. While both stocks and bonds have suffered significant declines simultaneously, which is unusual, it is not surprising given the absurdly low level of interest rates the past couple years. Fortunately, declines in financial markets also contain the promise of stronger returns in the future. To participate in the eventual recovery, which is impossible to time, one must stay disciplined, stay diversified, and rebalance the portfolio on a routine basis.

As always, please feel free to contact your advisor if you have any questions, or if you would like to review your portfolio and financial plan.